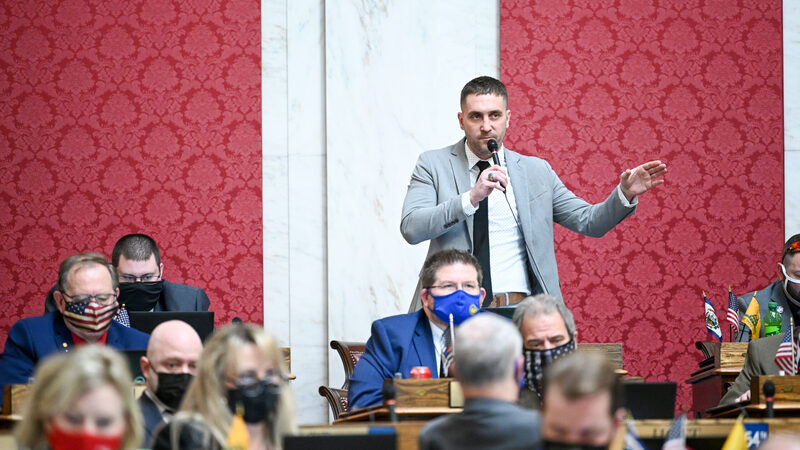 For the third year in a row. Delegate Patrick McGeehan (R-Hancock) failed in his effort to bring his Defend the Guard Act to a floor vote.

The bill, numbered 2138 this year, would prohibit the West Virginia National Guard and its members from being deployed to combat unless Congress declares war or expressly calls the Guard to action to “execute the laws of the union, repel an invasion or suppress an insurrection.” It would be in the governor’s hands to take the necessary action to comply with the bill’s mandate.

McGeehan, a military veteran, again stated his reasoning for the bill Friday, when he moved to have it discharged from the custody of the Veterans Affairs and Homeland Security Committee and advanced to Judiciary.

“We need to get back to some sort of sanity before we send our men and women into harm’s way overseas, ” he said. Article I Section 8 of the U.S. Constitution grants Congress the sole power to declare war.

In 2019, McGeehan succeeded in having the bill discharged from Veterans Affairs and taken up for consideration on the House floor. It got as far as second reading, but McGeehan criticized the Judiciary chair on the House floor—after previously being removed from Judiciary—and leadership channeled his bill to the inactive calendar.

This year, it’s been sitting idle since it was introduced the first day of the session.

McGeehan got some support from both sides of the aisle. Delegate Guy Ward (R-Marion) said he graduated from high school in 1974, after the Vietnam War and after the draft ended. But his mom had lived in a tight-knit neighborhood and babysat a boy who one day dreamed of flying jets.

He flew one in Vietnam and never came home, Ward said. “That war was senseless.”

Ward’s father was in military during Korea and begged Ward not to join the military. “They’re just going to start another Vietnam someday and I don’t want to see you go there.”

Ward said he doesn’t want to see young men and women go off to police actions and they need to send a message to Washington.

Delegate Chad Lovejoy (D-Cabell) said he didn’t know if he would support the bill but he supported the motion because he didn’t want to foreclose debate on the issue.

Opposing the motion, Majority Whip Paul Espinosa (R-Jefferson) argued that Veterans Affairs is the committee best equipped to consider the bill and they should honor the process.

Veterans Affairs chair Roy Cooper (R-Summers) pronounced the motion’s doom. He served in Vietnam in the Navy, he said, and doesn’t want to see the draft restored. After Vietnam the military changed to all volunteer and the highly trained National Guard became the tip of the spear.

“The troops do not want this because they know they are being trained for this, ” he said. He started to discuss federal funding but got sidetracked and never made his point.

His point was that last year, then-Adjutant Gen. James Hoyer said the Defend the Guard Act would cost the state about $140 million in federal funds and almost 1,000 jobs.

Cooper said he never had any intention of putting the bill on an agenda.

McGeehan told his colleagues to consider how much a war widow wants to hear her husband died because they voted to preserve federal funding.

His motion failed 26-71, with 11 Democrats and 14 Republicans joining him. The bill will die in committee.