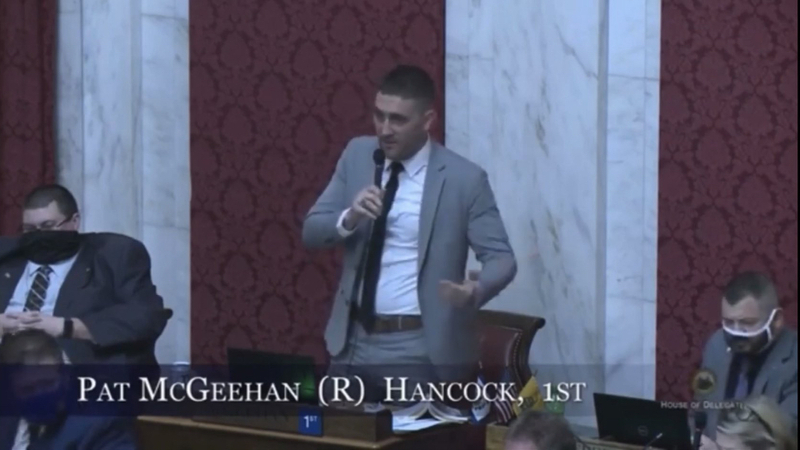 On March 12, 2021, Delegate Pat McGeehan (R-Hancock) argued in favor of a motion before the West Virginia House of Delegates that would have discharged his “Defend the Guard” legislation to the House Judiciary Committee for consideration, bypassing the House Veterans Affairs and Homeland Security Committee where it had languished due to the opposition of Roy Cooper (R-Summer).

The motion failed on a floor vote of 26 to 71. Prior to the vote, Delegate McGeehan made an impassioned speech arguing for its passage. That speech can be watched here, and a full transcript can be read below.

“Well I guess you see your answer here, with the gentleman who just spoke. They never had any intent to put it on the agenda in the minor committee, in Veterans Affairs. And that’s why this was necessary, so I could move it to a major committee with some thoughtful consideration of the merits of the bill. And that’s why I’m making this motion.”

“I know there’s a lot of anecdotes about different National Guardsmen or different active duty service members and asking them, ‘hey do you want a declaration of war before you go off and do your duty?’ And I was one of those kids after I graduated from the four years of hell I did at the Air Force Academy. I was gung-ho and wanted to get into the fight. And I probably would have said, ‘No I don’t want to wait for some politicians. I want to get over there.’ But that’s why we have prudent, wise civilian control over the military. And we all took an oath of office. And the oath of office is pretty objective, but it’s becoming more and more subjective as we deny truth itself in this secular age. Which by the way is a self-refuting statement because you presuppose the very thing you assert.”

“You know, I’m not some sort of 1960s counter-culturist by the way. Look at my haircut! I’ve had the same thing since I was 17, it’s high and tight. I did my time. My father, and I don’t talk about this a whole lot, was killed in the line of duty for a principle. He was an Air Force bomber pilot. My grandfather witnessed the surrender of the Japanese on board the USS Missouri in Tokyo Harbor. My other grandfather traversed Omaha Beach and was part of the Battle of the Bulge. My great-grandfather fought in the Argonne in the First World War. It’s not like I’m some sort of hippie proposing this bill. I rarely say this because I don’t think it should matter. I like the logic, the ideas. But if we want to have people stand up and say ‘I served these many tours and I know more than you’ and make all these appeals to authority, then I’ll just go ahead and do the same thing real quick to shut that down. Because I come from a lot of experience. My father took his oath of office very seriously, and I do too. And I hope all of you guys do.”

“There’s a lot more at stake here than this discharge petition. There’s a lot more at stake here than just this bill. Anybody in the service by the way, and there are a few officers in here that I think one went to the war college, knows just war doctrine, derived from Cicero, goes through Augustine, all the way through Thomas Acquinas. It’s taught at staff colleges and war colleges in all the armed forces but we don’t follow it. Every single conflict and war this country has been engaged in since the Second World War in one way or another has violated the very just war doctrine that we teach our senior officers.”

“I could go through the list. And the Founding Fathers knew these just war doctrines from these great thinkers and scholars from the ancients the medieval times. Look, I’ll read you a few quick, predominant quotes from the framers. The father of the Constitution, James Madison: ‘The Constitution supposes what the history of all governments demonstrates; that the executive is the branch of power most interested in war and most prone to it. It has accordingly, with studied care, vested the question of war in the legislature.’ Here’s another one. The author of the Declaration of Independence [Jefferson]: ‘We have already given an example one effectual check to the dog of war, by transfering the power of letting him loose from the executive to the legislative body. Considering that Congress alone is constitutionally vested with the power of changing our condition from peace to war, I have thought it my duty to await their authority for using force to any degree which could be avoided.’ Even Alexander Hamilton, who proposed and pushed for a stronger central government, here it is: ‘The Congress shall have the power to declare war; the plain meaning of which is that it the peculiar and exclusive duty of Congress when the nation is at peace to change that state into a state of war.'”

“I don’t understand how anyone can construe any of the intent from those quotes (and many others, I only selected a few) to be what the intent was when this nation goes to war. You know one thing that happens when we get together as a legislative body, we act a little bit slower than the executive. We debate issues. And war, let me suggest, is the greatest and gravest and most dangerous enterprise that the almighty state and that the government engages in. And so when the power of war is vested in a legislature like the Congress, it has to be debated transparently. And the truth at least has a chance, in those debates that are transparent [and] out in the open, to rise to the surface. So it puts the brakes on, before we rush headlong into some unnecessary war again. Sometimes war is necessary. But we’ve been at war for decades. And I just don’t want us to go the way of all the old great civilizations who destroyed themselves financially and at the cost of human blood.”

“I know this isn’t some of your issues, this isn’t your issue. I get it. You’re probably under a lot of pressure from other people saying ‘vote against this guy.’ You may like me, you may dislike me. Honestly I’m pretty indifferent to it. I just like the logic at hand. So I just ask you, if you agree with the idea, and you at least think it deserves a little bit more consideration, all I’m asking is that you discharge it from the minor committee (that’s not going to put it on the agenda) and so that we can at least have some sort of more considerate, judicious, thought-out debate in the next committee which is the Judiciary Committee. And I’m sure it’ll go down in flames there. But that’s all I’m asking. So, I take my oath of office seriously. And if we don’t have an objective standard, like a declaration of war anymore, then the truth lost. It becomes arbitrary. And we deserve to reclaim some sort of objective standard before we send our men and women into harm’s way overseas.”

“So I ask for the yeas and nays, thank you Mr. Speaker.”