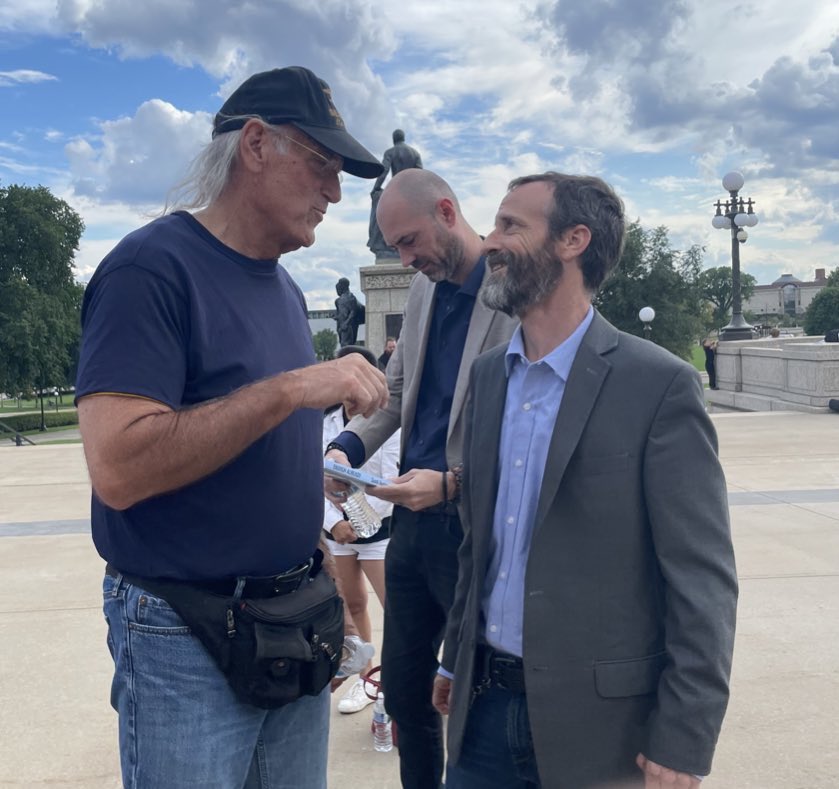 In a rally in Minneapolis, Minnesota on September 10, 2022, former Governor Jesse Ventura (1999-2003) gave a speech endorsing Defend the Guard legislation. You can read the full transcript of his speech below.

We’re here today, and we don’t have a big turnout. Which is too bad. It’s very sad, because this is an extremely important issue that we’re talking about. And that is protecting our National Guard, the men and women who serve the state of Minnesota in the National Guard.

Now, about the Iraq War, to my knowledge—you got your history lesson earlier—but to my knowledge the National Guard started to be used the wrong way. And why? Because you had a president apparently that served in the National Guard to get out of regular duty. And when he did that, he was in a place and time when the National Guard was not sent to Vietnam. The National Guard did what they were supposed to do. They were back here holding down the homefront. That’s their job. Why do you think the Constitution says our regular military cannot be out here amongst us? There’s a reason for that. And that’s why the Constitution is written the way it is. Our regular military is [meant to] defend our country, our borders, and the rest of the world out there.

Now let’s get political on that a minute. Anybody here figure out why we have a base in Syria? I just heard, we have a base in Syria. Maybe I should ask the question, are there any Guardsmen over there? Because it’s a legitimate question to ask today. Is the National Guard today in Syria? I’m questioning why we’re there. We haven’t declared war on Syria. Syria’s made it very clear they don’t want us. How would we feel for a moment, if somebody like Venezuela maybe—since they’ve got a little money from their oil—what if they decided they wanted to put the Venezuelan army in a base out in the deserts of Nevada? Think that would fly? Think the U.S. would sit back and let another foreign country put a military base inside our country? No. We all know the answer to that. So where the hell do we get off doing that around the rest of the world? Building bases.

And then I saw, have any of you ever taken notice of the defense bill, the defense spending? And how big it is? I saw a thing where our defense spending is more, it like ranks in the middle of the national gross product of half the nations of the world. Just what we spend on defense. And I’m still trying to figure out who’s trying to invade us. Who’s going to land on the shores of Virginia, or the shores of California, and invade the United States of America to the point where we have to spend the money we spend on defense? It is utterly absurd and ridiculous.

And we can start by continuing to press against these elected officials to pass this law, that they are not allowed to send the Minnesota National Guard to a foreign war without a vote to go to war. Enough of this. Enough of going to war without voting to do so. It’s simple, the Constitution says you gotta do it. Why aren’t we following the document of our land?

Why have we allowed the—well, we saw January 6th. There was a group of people who didn’t give a damn about the Constitution that day, did they? And you’re seeing it more and more. We’re not following the Constitution. That’s the rule of law, people. And if we don’t follow that we’ve got nothing. So it’s time to start following our Constitution, elect people who will follow the Constitution, and for God’s sake people, how many times will I have to say this: go out and vote.

You know, there’s an old saying; if you don’t vote, don’t bitch. If you can’t take time to go vote, then don’t sit and come bend my ear and tell me how things are wrong. In fact I’ll advocate for this: it’s time to make voting a national holiday. When you have a national election, I think that that’s a day—I mean, what the hell, we celebrated Columbus Day long enough didn’t we? I never did figure that one out. We celebrated Columbus discovering America. How do you discover something if there’s already people there? I haven’t figured that one out from my old school days. How do you discover something if there’s already somebody there? If we could have a Columbus Day holiday, certainly we can have a voting holiday for everybody to be able to go out (there’d be no excuses then) you’d go out and you’d vote for the candidate of your choice, for the candidate that you want, that thinks the most like you.

The other thing we need to do, and Minnesota could lead the way on this. Why do we put party names on the ballot? Put only the candidate’s name, no political parties on the ballot. Why? Because that makes for stupid voters. If they put political parties on the ballot, you can be a dummy. If you’re conservative you don’t need to know the name, you just look for ReBLOODlican. If you’re liberal, you don’t need to know the candidate’s name, you look for a DemoCRIP. (By the way, you know I did write a book called DemoCRIPS and ReBLOODlicans: No More Gangs in Government.) But I just want to say to everybody that, get out and vote. Be active.

And final thing is this when it comes to war. I’m going to plug one book. And I’ve said this before publicly. I believe this book should be mandatory reading for all high school seniors in America to be able to graduate from high school. And the name of the book, it’s a simple name. It’s called War is a Racket. I’ll repeat that book. It’s called War is a Racket. The author of that book is Major General Smedley Darlington Butler, United States Marine Corps. And I’ll tell you this: they don’t like nobody reading that book, because General Butler tells you exactly what war is. It’s a racket. And they can’t destroy General Butler, you know why? He didn’t win one, he won two Congressional Medals of Honor. How do you tell a two-time Congressional Medal of Honor winner he doesn’t know what war is? And Smedley’s book, the title says it all. War is a Racket. I encourage people—Smedley was a good Marine. That means he gets right to the point. Marines don’t beat around the bush. You know, they get right to the point. And Smedley does too. The book isn’t thick, but it gets right to the point and it will explain to you how war is a racket and it’s time for the United States to get out of the war business.