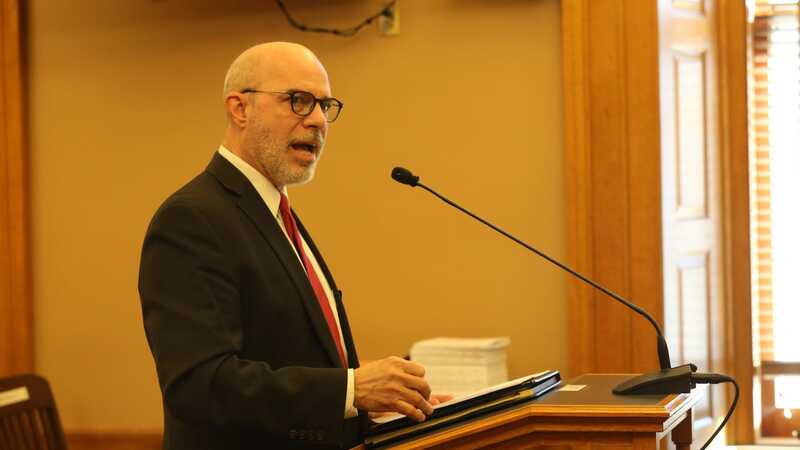 A bill before Kansas lawmakers seeks to ban COVID-19 vaccine mandates at the National Guard and block deployments without a congressional declaration of war, but concerns about losing federal funding could derail the effort.

Senate Bill 370, also known as the Defend the Guard Act, is part of a nationwide effort seeking to bring troops home while compelling Congress “to reassert its authority under the U.S. Constitution” over wars.

The bill would primarily bar the state from releasing the National Guard into active duty combat unless Congress has made a declaration of war or used another official action enumerated by the Constitution, said Jason Long, an assistant revisor of statutes.

The Constitution grants Congress the power to declare war, but presidents have assumed that role over the past half-century thanks to various use of force authorizations. Congress last approved a formal declaration of war during World War II.

The bill would not prohibit the governor from deploying the guard for “civil authority missions” within the country, such as a federal natural disaster response.

The bill also has a provision barring National Guard members from being compelled to be vaccinated against COVID-19 or to receive medical treatment for the disease. Guardsmen could not be disciplined for refusing vaccination or treatment.

The Senate Committee on Federal and State Affairs, chaired by Sen. Rob Olson, R-Olathe, introduced the bill at the request of Bob Corkins, of Frontier Peace Advisors. The House also has a version of the bill, HB 2501, that has yet to have a hearing.

If passed, Kansas would be the first state to enact this kind of legislation, though similar bills have been introduced elsewhere, Corkins told the committee during a Monday bill hearing. They have been doomed to fail for the same reason: the risk of losing federal funding.

“The legislation has been introduced in over 30 states so far, has not passed anywhere yet,” Corkins said. “Came close in West Virginia.”

Even there, the supporters have faced stiff bipartisan opposition since its introduction in 2015. The most recent vote came last spring, when a motion to bring the bill up for debate in the House of Delegates failed 26-71.

“First of all, it’s a relatively new movement,” Corkins said. “The other factor would clearly be the role of adjutant generals and other states who, fearing that this might result in some loss of federal funding for their state guards, are throwing up a lot of caution flags and concern.”

Kansas will be no different in that regard. even though Corkins called the risk of losing federal dollars “an implausible threat.”

“While the note correctly states that the enactment of this bill would not have an immediate fiscal effect, it does not address the risk to the Kansas National Guard’s future budgets,” Neuhold said.

Members of the state National Guard are dually enlisted in the U.S. National Guard. The state force receives more than 99% of its annual budget from the federal government.

“If passed, this legislation could signal to the Pentagon and to the Department of Defense an unwillingness to uphold our sworn federal obligation,” Neuhold said. “Without a federal mission, there’s little incentive for the federal government to continue funding the Kansas National Guard, and this could result in the removal of federal units, jobs and equipment.”

The Kansas National Guard provides the state with about 1,700 full-time jobs and 4,800 part-time jobs while operating about $4.5 billion worth of assets. A loss in federal funding could be detrimental to the economy and communities.

“For example, the Kansas National Guard fought the wildfires in western Kansas last month with the federally owned aircraft,” Neuhold said. “These aircraft are in high demand across the National Guard and could be relocated to another state if we had no federal mission.”

Corkins said that military actions should follow formal declarations of war, arguing that “the success of the following police actions falls far short of those engagements in which the whole support of the country was rallied behind a real war effort.”

Sgt. Dan McKnight, a veteran of the Marine Corps, Army and Idaho Army National Guard, said Congress has abdicated its responsibility by issuing authorizations of use of military force.

He called AUMFs “a blank check that gives the executive the ability to take the military anywhere in the world, for any length of time, for any dollar amount without any checks or balances.”

McKnight is the leader of the Defend the Guard movement and Bring Our Troops Home.

“With Defend the Guard, you often hear a lot of emotional statements in support and opposition,” McKnight said. “You hear statements of patriotism, funding, jobs, national pride, duty and honor, these are all words that we take very important.

“But I encourage you to remain focused on the purpose of the bill, which is simply to strengthen the constitutional principles regarding the ability to take our nation, and by extension our national guard, from a state of peace into a state of war.”

McKnight said the National Guard should be part of the fighting force when Congress declares war.

“To fight, and win, then come home — without a declaration of war though, that last part never seems to happen,” McKnight said.

“If Congress wants the citizens — tradesmen, teachers, firefighters, police officers of Kansas — to go and fight our nation’s wars, which they are prepared and capable to do, in probably the most professional manner, then Congress must first put their name on the line before Kansas National Guardsmen put their boots on the ground.”

Al Terwelp, political director for the Libertarian Party of Kansas, said Kansans were likely “not aware that we needed to address” this issue. But growing military tensions in Ukraine and elsewhere have made the issue more pressing.

He said the bill would protect the state’s guardsmen and guardswomen, state sovereignty and federal and state constitutions.

“The Constitution, among other things, is a process document,” Terwelp said. “We have a broken process. History tells us that presidents, emperors and kings are often the most invested in war and most prone to it. The lack of process eliminates and disregards the checks and balance designs of the Constitution.”

He said Kansas has the right to withhold deployment of the National Guard.

“Any threat of reducing Kansas funding in retaliation would be viewed by the populace as extremely unethical, hostile and bullying,” Terwelp said. “We highly doubt Congress, who doesn’t currently vote to declare war, would vote (for) a reduction. Nor do we believe our U.S. senators and congressmen would tolerate this action.”

Lawmakers were not particularly receptive to the bill, though they were generally supportive of the intent.

“I can understand some of the concerns people have. I just don’t know how well this will hold up in courts,” said Sen. Ron Ryckman, R-Meade. “If the president of the United States orders the guard to go someplace, and it’s not declared war, I don’t know how we could stop it.”

The definition of “active duty combat” was called into question.

For example, Sen. Mike Petersen, R-Wichita, questioned whether guardsmen in Ukraine would meet the definition, given the military threat posed by Russia. There was no definitive answer.

Sen. Cindy Holscher, D-Overland Park, said she appreciates the bill’s efforts around congressional declarations of war, but was concerned about the potential fiscal effects.

“If we implement statutes that differ from federal guidelines, that’s what causes the problem as far as the potential loss of funding,” she said.

Echoing concerns for the National Guard, Sen. Jeff Longbine, R-Emporia, said he also worries the bill could be detrimental to other military bases in the state. His district includes part of Fort Riley.

He said he is opposed to vaccine mandates, but the decision is up to the commander-in-chief, subject to court rulings.

“Kansas passing a law is not going to supersede federal action in a federal court,” Longbine said. “It’s unfortunate that that mandate has come down, but this bill will do absolutely nothing for that.

“My biggest concern is what message are we sending to the Department of Defense about the state of readiness in Kansas, and how does this affect our military installations? And I can’t see any angle that would make it any good.”

All military service members, including those in the National Guard, are required to get multiple inoculations.

U.S. military vaccine mandates date back to the American Revolution, when George Washington ordered his forces to get inoculated against smallpox.

Yet Lauren Shiffman, of Lenexa, compared the COVID-19 vaccine mandate to compulsory anthrax inoculations for military members two decades ago. Shiffman, who isn’t in the armed forces, was part of the anti-vax effort in November that led to a special session.

“If we can’t preserve the rights and freedoms of the people that fight for our freedom, then we have absolutely nothing and America is gone forever,” she said.

While legal challenges to military anthrax vaccine mandates found some initial success, the decisions were based on procedural issues that were later resolved. The anthrax vaccine order was ultimately found to be lawful once the shot received full FDA approval, though the military later ended the program.
Shiffman argued that COVID-19 vaccines aren’t approved. That’s not true.

Terwelp said the Libertarian Party opposes forced vaccination, including for the National Guard.

In Oklahoma, a federal judge rejected a request from Gov. Kevin Stitt to block the COVID-19 vaccine mandate for that state’s National Guard.

National Guard units generally have until June 30 to be fully vaccinated, but separation processes could start sooner.

Kansas lawmakers have already barred state funds from being used to implement a COVID-19 vaccine requirement.

Maj. Gen. David Weishaar, the adjutant general, said in October that only federal funds would be used to enforce the military’s mandate. He warned that failure to comply with the mandate could mean a loss of federal funds.

“As an entity subject to the discipline prescribed by Congress, I must ensure compliance with the regulations and requirements of the Department of Defense,” Weishaar said.