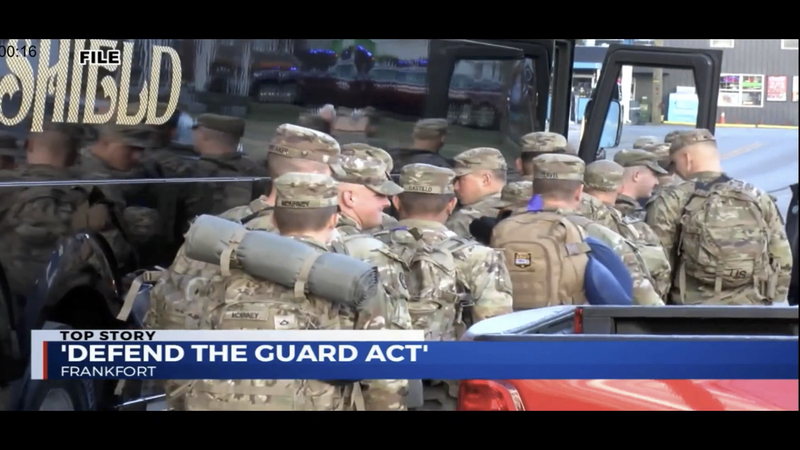 As a United States Army combat veteran who served in Iraqi Freedom, Jeremy Harrell knows all too well the sacrifices servicemen and women make.

“We spend a lot of our time working through repercussions of combat and what it can do to you mentally and physically,” Harrell said.

That’s why he’s a big supporter of the Defend the Guard Act, legislation meant to prohibit a state’s National Guard deployments into active combat without a formal declaration of war by Congress. Several lawmakers and veterans are efforting legislation, including here in Kentucky. Bill sponsor Republican representative Mark Hart, of Falmouth, says under the bill, Congress would need to pass an official declaration of war before Kentucky’s National Guard could be sent into combat.

“If it’s important enough for our government to mobilize our reserves and our national guard members, to be deployed into military actions, into combat zones, then their lives and their sacrifices they’re making to be able to do that, it should be important enough for the U.S. Congress to follow the Constitution and formally declare war,” Rep. Hart said.

Hart’s bill also includes a clause that would require the federal government to pay all outstanding balances for the guard’s services before they could be deployed.

He sites the January 6th attack on the U.S. Capitol, when the state governor sent guardsmen to Washington D.C to provide help. Hart says his bill wouldn’t limit the governor’s authority of sending the state’s National Guard to areas in need.

“This bill just says if he does that, that would say ‘well, if we send troops to help you do something, you need to pay that bill before we send them to do it again,” Hart said.

Harrell supports the bill. He thinks those who sacrifice need more protection.

“The constitution vested the power to declare war in congress,” Harrell said. “And we shouldn’t go and deploy troops and put their lives in danger, particularly the national guard, if we’re not sure exactly what we’re trying to accomplish. And so this defend the guard act really protects troops in that way. And so I’m also a proponent.”

The bill is expected to be heard by a house committee in the coming weeks.

You can watch the full clip here.