New Normal? How the Guard Is Fighting Worsening Natural Disasters Amid Deployments 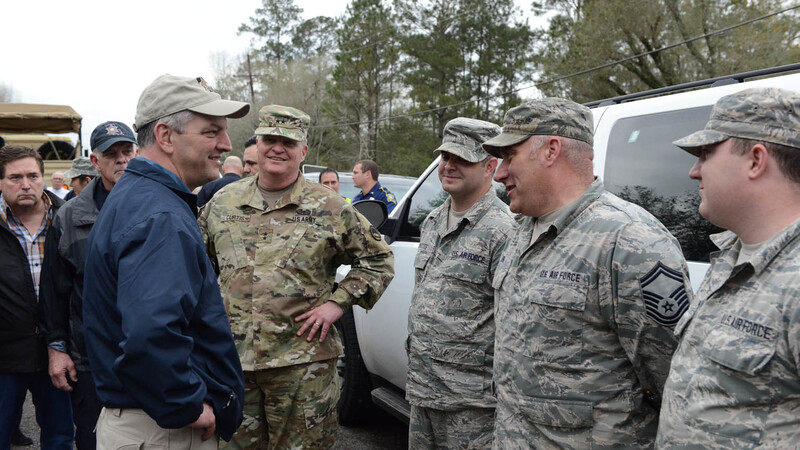 On the morning of Aug. 29, the Louisiana National Guard’s 256th Infantry Brigade Combat Team found itself watching from Iraq as a major hurricane barreled towards the state’s southeastern coast.

That was the situation Saturday as Hurricane Ida made landfall. More than 2,400 troops, and the state’s largest unit, were gone amid a 100 percent hurricane mobilization ordered by Louisiana Gov. John Bel Edwards.

But this had happened before — with the 256th deployed to Iraq, and the same landfall date.

And the California National Guard faces a similar situation in its wildfire response, with the 40th Combat Aviation Brigade currently in Iraq and Kuwait, as well.

The deployments have caused Louisiana and California to lean on the Guard units of other states for support, senior officials said in the teleconference.

“With our states [that are] most prone to hurricanes, we have an All-Hazards conference in the summer,” Hokanson told Army Times. “We take a look at each of the states and those units that are deployed…[and identify] units that could fill a lot of the capabilities that [the deployed units] would normally provide.”

For Louisiana, this meant calling on at least 15 other states to contribute troops through the Emergency Management Assistance Compact, a planning framework for states to loan National Guard and other disaster response support to requesting states.

“We’ve taken that plan and we’re executing that plan,” said Maj. Gen. Lee Hopkins, the state’s assistant adjutant general. “Fifteen states have committed…and more are available if we need it.”

Those troops will flow into Louisiana beginning Thursday, Hopkins noted. They will join the thousands of guardsmen already there, growing their ranks to about 8,000.

California coordinated with NGB and the National Interagency Fire Center to create a similar plan for wildfire season, Hokanson said.

“This is the first year that we’ve really taken the opportunity similar to hurricanes,” added the NGB chief. “We identified the fact that the [40th CAB] would be gone. And so states across the country identified air crews [and] trained them in advance so that, as California needs them, they can get there in a timely manner.”

The crisis isn’t likely to end soon. In fact, it will probably keep occurring on an annual basis, he said.

“Twenty or 30 years ago, a big fire was a 20,000 acre fire that burned for several weeks,” Baldwin observed.

These days, a big fire can burn that much in a single day.

To fulfill the demand, though, California has had to draw troops from 10 other states, in addition to requesting assistance from the active-duty Army and the Air Force Reserve.

Baldwin, California’s senior general, said the problem was exacerbated for his state by not having enough troops. He has one guardsman for every 147 Californians, whereas the average soldier-to-population ratio across the Guards of other states and territories is one-to-47.

The state simply doesn’t have enough troops, he said, and that’s causing “a strain on the formations that we have to go back to…time and time again to respond [to emergencies].”

But some commenters have highlighted another potential solution: Slowing down the Guard’s pace of overseas deployments or ending them altogether.

“The [Defense Department] should undertake a study of [federal] mobilizations of the Guard in the past 20 years and contrast their findings with the stated mission of the reserve component as ‘an uncommitted force kept aside for use in the event of an emergency,’” argued Center for a New American Security researcher Nathalie Grogan in a recent opinion article.

Grogan contends that the Guard “cannot be expected to function at the level of the active-duty force with fewer resources,” and either “must return to its stated emergency mission or be appropriated the funds necessary to assume the increased mission.”

And after two decades of Guard deployments throughout the wars in Iraq and Afghanistan, a handful of state legislators around the country have introduced legislative proposals intended to block their respective Guards from deploying overseas absent a formal congressional declaration of war.

Former Guard officials have previously said those proposals could dramatically affect the federal funding that allows its units to have the training and equipment to accomplish a secondary disaster response mission.

Hokanson remains focused on the mission as it currently stands, though.

“We have to do our federal [overseas] mission. That’s the whole reason the Guard exists,” he said. “But we’re also well aware of those natural disasters or recurring disasters we have to be ready for.”