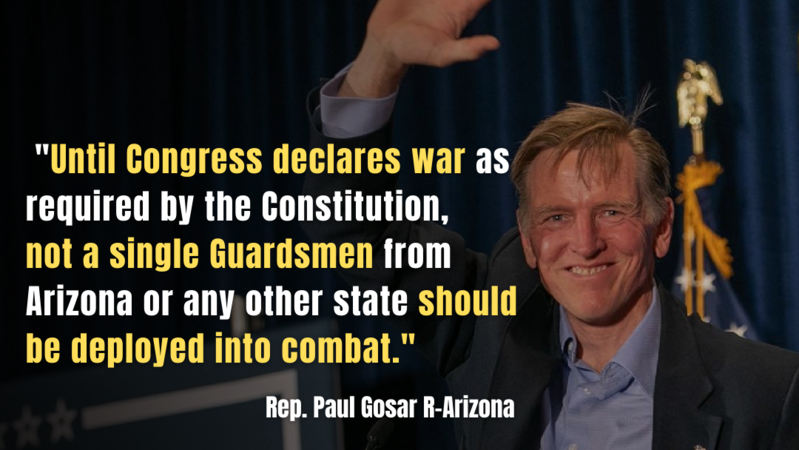 On February 3, 2022, Rep. Paul Gosar of Arizona had a statement, “Denouncing Russia-Ukraine War Mongering,” included in the Congressional Record. This statement featured an endorsement of Defend the Guard legislation, particularly supportive of S.B. 1350, introduced by State Senator Wendy Rogers in Arizona.

Rep. Gosar is a conservative Republican who has served in Congress since 2011.

You can read the complete text of his statement below, or download a PDF of the relevant page of the Congressional Record here.

“Madam Speaker, I rise today to address the drumbeat for war in Eastern Europe we have been listening to for weeks now.

For over two weeks the American people have watched with intense concern and uneasiness the heightened tensions between Ukraine and Russia.

It is not so much the border issues between these nations that concerns Americans, but the loose talk of the Biden Administration to involve the United States in a hot war against Russia.

Americans do not dread that territorial disputes are taking place over 6,000 miles away. They dread that the Biden administration may involve them in another costly, stupid war, one with potentially devastating results for their families.

The foreign policy issues of Eastern Europe are complex, but the law is not. The Constitution of the United States, written plain as day in Article I, Section 8, Clause 11, gives Congress the so le power to declare war.

Not the president, not the lifelong bureaucrats in the State Department, or the diversity trained generals in the Pentagon, and especially not the quote-unquote ‘‘experts’’ educated beyond their capacity.

Only the people’s elected representatives.

I have served in this body for over a decade, and it’s clear to me that Congress has no interest in picking up its constitutional prerogative or making itself accountable to the voters. In their absence, I believe the need for action must devolve to the states. Federalism requires as much.

In Arizona, State Senator Wendy Rogers has introduced a bill called the Defend the Guard Act. It stipulates that unless Congress has formally declared war, Arizona National Guardsmen are prohibited from being deployed into active combat overseas.

Rogers is a retired Lieutenant Colonel who served for twenty years in the U.S. Air Force. And I think she speaks for a lot of soldiers who are tired of being sent into undeclared, no-win wars that go on for decades.

One of America’s finest soldiers, two-time Medal of Honor recipient and Marine Corps Major General Smedley Butler, said of our troops, ‘‘We Americans who will protect our flag should have a voice in where it is flown.’’

The United States of America has the greatest, bravest fighting force in the history of the world.

And if Congress has one ounce of respect for their courage and sacrifice, and the founding document they swore an oath to defend with their lives, we would vote before ever sending them into battle.

Our names should be on the dotted line before their boots ever hit the ground, whether in Ukraine or anywhere else in the world.

And until Congress declares war as required by the Constitution, not a single Guardsmen from Arizona or any other state should be deployed into combat.

I believe Arizona ought to be the first state to pass the Defend the Guard Act and lead the way in protecting our sons and daughters in uniform from federal abuse and challenge this Congress to start following every part of the U.S. Constitution.

If history has taught us anything it is this: we have lost trillions of dollars and tens of thousands of American lives fighting ridiculous wars in Vietnam, Iraq, and Afghanistan. We have the best military force in the world and some of the most inept military leaders. And to be fair, the political rules imposed on our military leaders, the so called Rules of Engagement, deprive our military of a clear path to victory. Indeed, the political aspects of those wars, to ‘‘build nations’’ or to win hearts, is as inane as it was unsuccessful. War is to destroy the enemy, not build nations.

Historical failures of Western countries confronting Russia militarily in Eastern Europe in the winter taught us the foolhardiness of such an effort. We cannot make the same mistake, in a conflict which we have no justification to be in to begin with.

Most critically, the United States has no interest to protect there. Certainly no interest strong enough to risk war with Russia.

I denounce the war mongering.”