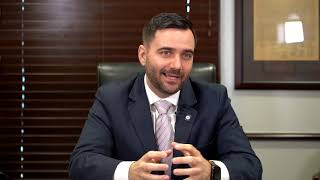 State Sen. Nathan Dahm filed a bill on Tuesday that aims to ensure men and women serving in the Oklahoma National Guard are “deployed only in a manner directly specified by the United States Constitution.”

Dahm said Senate Bill 29 “would prohibit any member of the Oklahoma National Guard from being released into active duty combat unless Congress has formally declared war or issued a call for a specific purpose related to executing the laws of the union, repelling an invasion, or suppressing an insurrection.”

He said the proposal is strongly supported by Oklahoma National Guard members and their families.

“This bill reinforces the American principle of federalism by attempting to correct the balance of power between the executive and legislative branches of the federal government,” Dahm said. “It is my hope that it will curtail the federal government’s ability to use Oklahomans for endless wars without congressional oversight or accountability.”